Only Witness,
A Benefit for the Indiana Writers Center featuring Jim Powell, with an introduction by Dan Wakefield

Join us on Friday, March 8 from 6-8 PM to celebrate the fortieth anniversary of the Indiana Writers Center with the launch of Only Witness, a collection of short stories by its founder, Jim Powell. We’ll share drinks and hors d’oeuvres, then listen to Jim read a short selection from the book. Signing will follow. Go here for all the details.

The Poets Laureate of Lawrence
(www.artsforlawrence.org)

Join us for our monthly featured author/open mike series that happens every 4th Tuesday of the month. This month our featured poet is Mary Sexson.

Mary Sexson, nominated for a Best Books of Indiana award in 2005, and co-author of Company of Women, New and Selected Poems (Chatter House Press). Her poems have appeared in Flying Island, Tipton Poetry Journal, New Verse News, and Hoosier Lit Literary Magazine, among others, and in several anthologies, including The Globetrotter’s Companion (UK, 2011), Reckless Writing (2013), A Few Good Words (2013), The Best of Flying Island (2015), and Words and Other Wild Things (2016). She was recently a part of the DaVinci Project, and her poetry is part of a year-long installation at the Prophetstown State Park in Indiana.   She has upcoming work in Flying Island in January 2019. Find her at Poetry Sisters, on Facebook.

Sigmund Freud called dreams the "Royal Road to the unconscious," but to bestselling author and world-renowned dream explorer, Robert Moss, they are more: portals to the imaginal realm, a higher reality that exists at the intersection of time and eternity.The traveler's tales in this book are just-so stories in the sense that they spring from direct experience in the many worlds. As you journey from the temple of the Great Goddess at Ephesus to an amazing chance encounter on an airplane, from Dracula country in Transylvania to the astral realm of Luna, you'll confirm that the doors to the other Other-world open from wherever you are.
Read more about Robert Moss at: http://mossdreams.com

Saturday, March 2 at 4–5PM
Join Kristin at Indy Reads Books for a reading from Fence, Patio, Blessed Virgin. You’ll also hear a few poems from the forthcoming Each Darkness Inside.

Fence, Patio, Blessed Virgin is a poetry chapbook of a granddaughter's memories woven with narrative drawn from the final years of her grandmother's life.

Read more about Kristin and her work:
https://www.kristinbrace.com/

Get in, get culture, get out. This is the motto of Poets Attack. The last Wednesday of each month, for 90 minutes or less, Irvington Vinyl & Books hosts two talented local poets and pairs them with visiting writers from out of state. The goal is to connect Hoosier poets with writers from across the United States, and to build relationships between our local scene and the world outside. We believe poetry is meant for everybody; that’s why we keep our readings short and our admission free. Poetry For All.

Go here to get all the details. 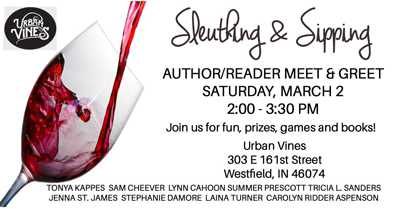 Kalynn Brower is a multi-media storyteller and educator. Her YA series chronicling the Bosque Family Adventures to Blue Grannus and Green Terra is a delight.  As is the show she’s currently hosting on WFHB, Eco Report.  She’s an eco-warrior and a feminist, the producer of the wonderful Stardust and Moonbeams. And a smart, witty presence in public school classrooms, where she shares her passion and her work.

Lisa Kwong is an AppalAsian writer in the Midwest, where she currently teaches courses in Asian American Studies and English at Indiana University. Her poems and essays are forthcoming or have appeared in A Literary Field Guide to Southern Appalachia, Anthology of Appalachian Writers, Best New Poets 2014, the minnesota review, Banango Street, Pluck!, and other journals. Her honors include poetry scholarships and fellowships from Indiana University, The Frost Place, and Sundress Academy for the Arts, where she was the 2017 Appalachian Writer-in-Residence. Lisa will be the keynote speaker at the 17th annual Vietnamese Interacting As One (VIA-1) Conference, hosted by the Union of Vietnamese Student Associations-Midwest at IU on March 22-24. She will debut a preliminary version of her keynote at this reading.

Shana Ritter’s  poetry and short stories have appeared in Lilith, Fifth Wednesday, Georgetown Review and others. Her chapbook, Stairs of Separation, is available from Finishing Line Press. Her new novel set in Spain in 1492 will be released this month.  Shana has been a recipient of the Indiana Individual Artist Grant multiple times.

Charles Culp was born and raised in a town called Vincennes. After receiving his degree in Education from Indiana University in 2008, he joined Americorps. Since then he has been an advocate for non-profits and community education in Colorado, Tennessee, and now in his home state of Indiana. He is passionate about making a lasting connection with readers, and he believes every person has an opportunity to grow and thrive as they discover their passions through the never-ending, formative years of our lives.

Patsy Rahn‘s poetry and prose have been published in various journals and anthologies. Her book of poetry The Grainy Wet Soul is available through online booksellers. For more information visit her website at https://patsyrahn.com

Paul Smedberg was born early in life and, over the years, inflated to his present size and age. He enjoys long walks on imaginary beaches, getting imaginary sand in his inexpensive street shoes. Blissfully married with three hominid spawn, Paul came to Bloomington so long ago that pterodactyls could be seen lazily circling the courthouse dome. He did some higher ed at the local land grant and then founded and crashed a number of small businesses in a never ending quest to avoid real work. His first volume of poetry, “Event Horizon” was self-published in the late Cenozoic era.

Sarah A. Chavez, a mestiza born and raised in the California Central Valley, is the author of the poetry collections, Hands That Break & Scar (Sundress Publications, 2017) and All Day, Talking (dancing girl press, 2014), selections of which were awarded the Susan Atefat Peckham Fellowship.  Her manuscript, This, Like So Much, was an Honorable Mention for the 2013 Quercus Review Press Poetry Book Contest and she was named one of the 2016 Top Ten “New” Latino Authors to Watch (and Read) by LatinoStories.com.  Chavez holds a PhD in English with a focus in poetry and Ethnic Studies from the University of Nebraska – Lincoln. Her work can be found or is forthcoming in the anthologies Xicanz: Mexican American Writers of the 21st Century and Imaniman: Poets Writing in the Anzalduan Borderlands as well as the journals Brevity, North American Review, VIDA, Pretty Owl Poetry, Atticus Review, and The Fourth River Tributaries Series, among others.  She recently joined the faculty at the University of Washington Tacoma where she teaches creative writing and Latinx/Chicanx-focused courses.  She serves as the poetry coordinator for Best of the Net Anthology and is a proud member of the Macondo Writers Workshop. Amherst. 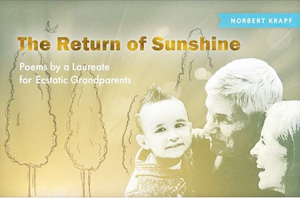 Norbert Krapf returns to the Poetry On Brick Street microphone to share poems from his latest book. whether you are a grandparent or remember fondly being a grandchild you'll enjoy this poetic celebration of life.

“Thinking about this happy come-together of grandfather and grandson in these tender, personal poems, I was struck by the reality in this grim world: Very few children in the world get this intense kind of attention and devotion. How lucky we are to write and read poetry like this! To have the benefit of leisure and understanding! To have the right words for this closeness and affection. To have the chance of documenting these precious times that pass so quickly and irretrievably.” Helmut Haberkamm, poet & playwright. 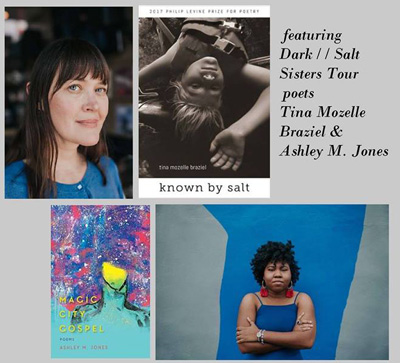 Join us for an International Women's Day celebration featuring Dark / / Salt Sisters Tour poets Tina Braziel and Ashley Jones. International refreshments will be served in the lobby starting at 7 p.m., and a multicultural, multilingual open-mic will follow the main performance. If you would like to be a part of this open-mic reading, please contact Terry Kirts at tkirts@iupui.edu. This event is made possible by generous support from the Reiberg Family, IUPUI's Division of Diversity, Equity and Inclusion, and the Women’s, Gender, and Sexuality Studies Program at IUPUI.

Tina Mozelle Braziel won the 2017 Philip Levine Prize for Poetry for her book Known by Salt (Anhinga Press 2019). Her chapbook, Rooted by Thirst, came out in 2016 with Porkbelly Press. Her individual poems have appeared in The Cincinnati Review, Southern Humanities Review, Tampa Review, Appalachian Heritage, PMSpoemmemoirstory (where her work was nominated for a Pushcart Prize) and other journals. In 2018, she was awarded a fellowship for the Alabama State Council for the Arts. In 2017, she served as an artist-in-residence at Hot Springs National Park. She was awarded an M.F.A. scholarship to the Sewanee Writers’ Conference in 2013. She earned an M.F.A in Poetry from the University of Oregon, an M.A. in Poetry at the University of Alabama at Birmingham, and a B.A. in Intercultural Studies at the University of Montevallo. She directs the Ada Long Creative Writing Workshop at the University of Alabama at Birmingham, and she and her husband, novelist James Braziel, live and write in a glass cabin that they are building by hand.

Ashley M. Jones received an MFA in Poetry from Florida International University (FIU), where she was a John S. and James L. Knight Foundation Fellow. She served as Official Poet for the City of Sunrise, Florida’s Little Free Libraries Initiative from 2013-2015, and her work was recognized in the 2014 Poets and Writers Maureen Egen Writer’s Exchange Contest and the 2015 Academy of American Poets Contest at FIU. She was also a finalist in the 2015 Hub City Press New Southern Voices Contest, the Crab Orchard Series in Poetry First Book Award Contest, and the National Poetry Series. Her poems appear or are forthcoming in many journals and anthologies, including the Academy of American Poets, Tupelo Quarterly, Prelude, Steel Toe Review, Fjords Review, Quiet Lunch, Poets Respond to Race Anthology, Night Owl, The Harvard Journal of African American Public Policy, pluck!, Valley Voices: New York School Edition, Fjords Review: Black American Edition, PMSPoemMemoirStory (where her work was nominated for a Pushcart Prize in 2016), Kinfolks Quarterly, Tough Times in America Anthology, and Lucid Moose Press’ Like a Girl: Perspectives on Femininity Anthology. She received a 2015 Rona Jaffe Foundation Writer’s Award and a 2015 B-Metro Magazine Fusion Award. She was an editor of PANK Magazine. Her debut poetry collection, Magic City Gospel, was published by Hub City Press in January 2017, and it won the silver medal in poetry in the 2017 Independent Publishers Book Awards. Her second book, dark // thing, won the 2018 Lena-Miles Wever Todd Prize for Poetry from Pleiades Press. She won the 2018 Lucille Clifton Poetry Prize from Backbone Press, and she is the 2019 winner of the Lucille Clifton Legacy Award from St. Mary’s College of Maryland. She currently lives in Birmingham, Alabama, where she is founding director of the Magic City Poetry Festival, 2nd Vice President and Membership Chair of the AWC , co-coordinator of the Nitty Gritty Magic City Reading Series, and a faculty member in the Creative Writing Department of the Alabama School of Fine Arts. Neil Hilborn is a College National Poetry Slam champion, and a 2011 graduate with honors from Macalester College with a degree in Creative Writing.