The Poets Laureate of Lawrence
(www.artsforlawrence.org)

Join us for our monthly featured author/open mike series that happens every 4th Tuesday of the month. This month we are Honoring Mary Oliver.  To celebrate the life and work of much loved poet Mary Oliver, Liza Hyatt, monthly host of Poet’s Laureate of Lawrence, will share a selection of favorite Oliver poems.  In the open mic portion of this evening, all attending are invited to share their favorite Oliver poem, or poems inspired by and responding to her.

What are the effects of poetry and music on the mind and the body? Where do art and medicine meet? Join us for a conversation with Adrian Matejka, Nate Marshall, and Eileen Misluk about Poetry, Music & Mind.

Adrien Matejka is a National Book Award and Pulitzer Prize-nominated poet who teaches at Indiana University Bloomington and is Poet Laureate of Indiana. His most recent book is Map to the Stars (Penguin, 2017).

Nate Marshall is the author of Wild Hundreds (University of Pittsburgh, 2015) and co-editor of The BreakBeat Poets: New American Poetry in the Age of Hip-Hop (Haymarket, 2015). He was the star of the award winning full-length documentary Louder Than a Bomb and has been featured on the HBO original series Brave New Voices. He lives on the South Side of Chicago.

Eileen Misluk is Director of Art Therapy and Assistant Clinical Professor at Herron School of Art + Design, IUPUI. She is a registered and board certified art therapist, licensed professional counselor, and licensed mental health counselor.

This event is part of the IUPUI Arts & Humanities Institute’s Entanglements Series which puts scientists, social scientists, humanists, and artists in conversation with the audience to ask questions that transcend disciplinary boundaries.

Poetry, Music, & Mind is co-presented with the Department of English at IUPUI and the Reiberg Reading Series at IUPUI. Support for this event comes from the Indiana University New Frontiers in the Arts and Humanities grant program. 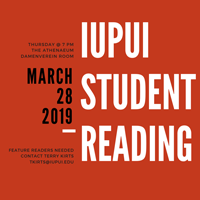 Thursday, March 28, at 7pm in the Damenverein Room of the Athenaeum.

Come join us as IUPUI students and community members perform their original poetry, short stories, essays, and songs. Meet fellow writers and artists and join in audience participation games to win fun prizes. Step up to the mic and share your own creative works.

Established in 1999, the IUPUI Student Readings are sponsored by IUPUI's Creative Writing Program and are free and open to all. Please contact us at least one week before each reading to be a featured reader. Open-mic spaces are limited and cannot be guaranteed on the night of the reading.
Contact Terry Kirts to be a featured reader at tkirts@iu.edu.

The lecture, titled, “The Monuments Men: Anthropological Heroes, Nazi Thieves, and the Greatest Treasure Hunt in History,” describes the race against time as a special force of museum curators, art historians and architects from fourteen countries scoured Europe looking for works of art that Nazi forces had confiscated from private citizens and museums.

One of Edsel’s goals is to expand awareness of “who the Monuments men and women were and what their roles were during World War II, and the truly epic achievements they had during the most destructive conflict in history,” he explained.

His current books are available from Amazon or from the author.
Things That Get You (2014)
The Divining Rod (2016)
Meeting the Moon Halfway (2018)

Alex Chambers is the author of Bindings, a collection of poems forthcoming this summer from Pickpocket Books. His radio stories appear on Earth Eats, out of WFIU, and his poems and essays in Gulf Coast,Forklift, Ohio, and elsewhere. He teaches American Studies and breadbaking.

LuAnne Holladay writes poetry — and other stuff — to help her make sense of the wonder and worry of the world. She tries to pay attention to things, and writing helps her do that.

Valeria Luiselli is an award-winning Mexican novelist and nonfiction writer. She will present a public reading and give a talk, as part of IU’s Mexico Remixed series.

Free and open to the public but you need tickets: https://www.visitbloomington.com/event/mexico-remixed-presents%3A-valeria-luiselli/40882/

InConJunction presents The Works of Kilgore Trout
Sunday, March 31, 2–4pm
In excerpts from Kurt Vonnegut's works, we get to know the mind of his alter ego, Kilgore Trout, the greatest science fiction author who never lived!

This event is hosted by InConJunction, the local fan-run sci-fi and fantasy convention (July 5-7), presented by the Circle of Janus SF/F fan club for the 39th year. The convention regularly donates to literacy causes, including to Indy Reads Books in recent years. This year's beneficiaries are Indy Reads and the Kurt Vonnegut Museum and Library.

Join us (12pm) at the Indianapolis Artsgarden to hear works from:

Kevin McKelvey is a place-based writer, poet, designer, and social practice artist. His poetry book, Dream Wilderness, was published last year, and another book, Indiana Nocturnes, written with Curtis Crisler, will be published this year. He is at work on a novel and regularly completes workshops, art installations, and placemaking projects around Indiana. At the University of Indianapolis, he serves as Associate Professor in the English Department and as director of the university's Masters in Social Practice of Art program. McKelvey grew up on the edge of a cornfield near Lebanon, Indiana, and attended DePauw University and Southern Illinois University Carbondale.

Co-sponsored with Butler University's Center for Faith and Vocation, we're pleased to present a candid conversation with Eula Biss about her personal journey to writing as vocation which fosters public dialogue on race, resistance, culture and identity. Eula Biss is the author of three books: On Immunity: An Inoculation (2014), named a finalist for the National Book Critics Circle Award for nonfiction and chosen by Mark Zuckerberg for Facebook’s Year of Books; Notes from No Man’s Land: American Essays (2009), winner of the National Book Critics Circle Award for criticism and a collection of poetry, The Balloonists (2002).

A frank and fascinating exploration of race and racial identity, Notes from No Man’s Land was described by Salon as “the most accomplished book of essays anyone has written or published so far in the 21st century. It provokes, troubles, charms, challenges, and occasionally hectors the reader, and it raises more questions than it answers. It is strident and brave in its unwillingness to offer comfort, and, unlike all but a handful of the best books I have ever read, it is unimpeachably great.”

Biss’ work has been supported by fellowships from the Guggenheim Foundation, the Howard Foundation, and the National Endowment for the Arts, as well as by a Jaffe Writers’ Award. She holds an M.F.A. in nonfiction writing from the University of Iowa and teaches writing at Northwestern University. Her essays have recently appeared in The Best American Nonrequired Reading and the Touchstone Anthology of Contemporary Nonfiction as well as in The Believer, Gulf Coast, Denver Quarterly, Third Coast, The New York Times Magazine, and Harper’s.

Tommy Orange is a recent graduate from the MFA program at the Institute of American Indian Arts. He is a 2014 MacDowell Fellow, and a 2016 Writing by Writers Fellow. He is an enrolled member of the Cheyenne and Arapaho Tribes of Oklahoma. He was born and raised in Oakland, California, and currently lives in Angels Camp, California.

Hosted within Cowork Evansville, this event will be emceed by Erik Deckers, professional writer, content marketer, newspaper humor columnist, book author, and smartass. He also knows words that rhyme with 'purple' and 'orange,' which he promises to share. (And no, "door hinge" is not one of them.)

Newbies or seasoned veterans welcome
Please keep it to a maximum of 6 to 8 minutes or about 1,000 words
Showcase your work and have fun

A sign-up sheet is available when you walk in starting at 7:00 PM. Or you can simply sit back and enjoy the evening. Coffee will be available.
The show starts at 7:30 PM.

More info at http://www.mokbpresents.com/. Have a question? Email us at natalie@mokbpresents.com! Neil Hilborn is a College National Poetry Slam champion, and a 2011 graduate with honors from Macalester College with a degree in Creative Writing.