Steve Beaven reading "WE WILL RISE: A True Story of Tragedy and Resurrection in the American Heartland"
Friday, January 3, 2020, 6pm – 8pm

For two decades the University of Evansville dominated small-college basketball, winning five national titles under the oversight of their charismatic coach, Arad McCutchan, a local icon more famous than the mayor or the governor. When McCutchan retired in 1977, a young coach named Bobby Watson took over as the Purple Aces moved up to Division I. But on the foggy night of December 13, 1977, the unthinkable happened: the entire University of Evansville basketball team and Coach Watson were killed when a plane crashed upon takeoff at the local airport.
The tragedy seemed insurmountable, a devastating blow to the identity of a fading factory town. But as the entire community mourned, the university hired Dick Walters, a hotshot young coach from the Chicago area, who promised to rebuild the cherished institution. Assembling a team of castoffs, walk-ons, and overachievers, Walters restored the legacy of the team and its fans, and led the Aces to the NCAA tournament at the very moment that Larry Bird, Magic Johnson, and Michael Jordan were making basketball a global phenomenon.

WE WILL RISE: A True Story of Tragedy and Resurrection in the American Heartland (Little A; January 1, 2020), by journalist Steve Beaven, tells the inspiring true story of loss and triumph. It is a tribute to those who were lost and to those who carried on, a rich and powerful story of an underdog team and its fans and the unbreakable spirit of community.

On a class field trip to Earth, students from outer space learn that humans have been overtaken by a mysterious presence that seems to be “tangling” their communication! The ‘Tangles provides a unique perspective on how current technology is affecting human interaction. It also emphasizes the importance of monitoring device usage and reminds people of all ages that this monitoring will keep us healthy and connected to each other.
thetanglesbook.com

Darrell Stone grew up in Greater Boston, with an artistic passion for storytelling.   She holds a masters degree in social work from Indiana University and a bachelors degree in theatre from Northeastern University.  In addition to her love for writing, Darrell is a free lance photographer, actor and director.  Writing complements her love for being an observer of human behavior and our environment.  Her pieces are additionally rooted and expressed from the foundations of her professional careers in social work and theatre.  ​ Darrell’s essays are known for simply pausing on a moment which can be stunning, hopeful, or meaningful to the human experience. Writing prose, snapping pictures, capturing moments, telling stories: each reveals the relationship between design, nature, people and place.​ Every moment has a story and Darrell calls us to bear witness and share that truth.​  Ultimately, Darrell Stone hopes her writing provides the reader or listener with a keen eye into the soul of the world around us. ​She is currently working on a collection of essays for publication.​

Eric Rensberger is a local poet who has been performing his work around Bloomington for about 40 years. The same 3 poems, over and over. He never tires of them. While it is true that he has read many other poem-like items, none of them are really finished. Only the 3. And he won’t tell you which ones they are. A large selection of his work is available on his website, ericrensbergerpoetry.net . In addition to his poetry, he also writes the occasional essay, story, or lengthy lie. And sometimes he just talks to you, which he believes qualifies as spontaneous prose work.

It's our annual strictly open-mic show and only $5 cover!  This is the chance to release, rehearse, and recite your work.

There will not be a DJ for this event so you will not be able to have your tracks played behind you...BUT what a great way to rock an A Cappella or collaborate with your guitar playing, Djembe pounding friends or finally work out your set with your loop pedals.

Artists will only be allotted 5-7 minutes to perform, so keep that in mind.  Signup is at the event, on a 1st come 1st spit basis and will be cut off at 13 artists.

Sexism, homophobia, islamophobia, transphobia, xenophobia will in NO WAY BE TOLERATED.  (Signup will not guarantee performance and at discretion of our founder, Tatjana Rebelle).
Door opens at 7pm and show starts at 8pm

This event will feature Pushcart prize nominees from The Indianapolis Review, Flying Island, So it Goes, and the Tipton Poetry Journal. 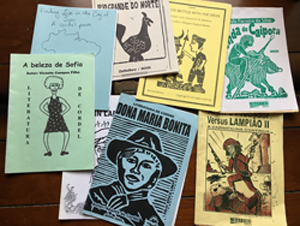 Brazilian "literatura de cordel" is a folk poetry form, created by and for the people as a means to teach morals, provide entertainment, and share stories.

Funded through a U.S. Department of State Citizen Diplomacy Action Fund grant, Brazilian arts and culture producer
Prussiana Fernandes will be in Indianapolis on  to teach a workshop on cordel: where it came from, why it's still important today, and how to create it.

Prussiana Araújo Fernandes Cunha is a cultural education professional and publisher from Belo Horizonte, Brazil. She completed her Bachelor’s and Master’s degree in cultural communication at the Universidade Federal de Minas Gerais. Her published research, “As narrativas urbanas dos ambulantes de Belo Horizonte”, focuses on urban narratives from marginalized voices. She is both the co-founder and creative director of Editora Calamares, an independent publishing house that focuses on publishing local writers and works in translation.

This event is appropriate for anyone interested in poetry, storytelling, zines, the role of art in creating community, Brazil, and/or Latin America. 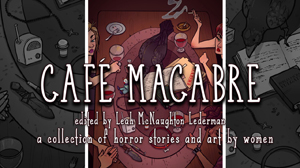 Join Leah Lederman, project creator, and contributors Kari McElroy and Jennifer Barnett as they read from and discuss the process of Cafe Macabre: A Collection of Horror Stories and Art by Women.

For more than thirty years, poet Marie Howe has been transforming ordinary life into extraordinary visions. As Arthur Sze, the most recent National Book Award winner for poetry, has said, “Her poems are acclaimed for writing through loss with verve, but they also find the miraculous in the ordinary and transform quotidian incidents into enduring revelation.” As Howe herself puts it, she is obsessed “with the metaphysical, the spiritual dimensions of life as they present themselves in this world."

Howe’s most recent volume of poetry is Magdalene (2018), which was long-listed for the National Book Award. Her other books are The Good Thief (1999), a National Poetry Series selection; The Kingdom of Ordinary Time (2009), a finalist for the Los Angeles Times Book Prize; and What the Living Do (1999), a wrenching, plain-spoken elegy for her brother John, who died of an AIDS-related illness in 1989.

Howe has received numerous honors, including fellowships from the Guggenheim Foundation, the National Endowment for the Arts, and the Bunting Institute. From 2012 to 2014, she served as Poet Laureate of New York State, and in 2018 she was elected a chancellor of the Academy of American Poets. She lives in New York City, where she teaches at New York University and Sarah Lawrence College.

Nancy Chen Long is the author of Wider Than the Sky (Diode Editions, 2020)  and Light into Bodies (University of Tampa Press, 2017). She is the grateful recipient of a National Endowment of the Arts Creative Writing Fellowship. Her work was chosen as the winner of the 2019 Poetry Society of America Robert H. Winner Award and featured in Poetry Daily, Verse Daily, and Indiana Humanities. nancychenlong.com

Gnat Bowden is a conceptual researcher in Indiana. Their work investigates how cultural structures affect language, the body, and public space.

Rachel Sahaidachny is the Executive Director of the Indiana Writers Center, and associate editor of The Indianapolis Review. She holds an MFA from Butler University, and is former poetry editor of Booth: A Journal. Recent writing has been published in South Dakota Review, The Southeast Review, Radar Poetry, Community of Writers Poetry Review, and others. She was a finalist for the Radar Poetry Coniston Prize, and awarded first prize in the Wabash Watershed Indiana Poetry Awards. Find her at www.rachelsahaidachny.com.

Sam Ferrante is a queer poet, bartender, and MFA candidate in Butler University's Poetry program in Indianapolis, IN. Originally from Long Island, NY, she has been lucky enough to have featured with La Mama Poetica, Melbourne Spoken Word, Passionate Tongues, and a couple other spots. Her mom gave her chapbook Pick Me Up (2016) rave reviews.