This new books falls into the literary genres of thriller/suspense/crime drama, similar to a John Grisham novel. "The American Dream" takes the reader on a page-turning joyride as one young man embarks on a tense, desperate pursuit for justice against a vicious criminal organization in an unforgettable battle of wits.
https://www.theamericandream.biz/ Join Us this Friday for the first Tea’s The Artist a Youth Open Mic Night from 6pm-9pm!!!

Tea’s The Artist is every First Friday of the Month and is a great way to celebrate our Youth and the amazing talents they hold.

$5 Donations at the door and a $4 Raffle with Great Prizes Every Month!!!

Zilia Balkansky-Sellés is a Bloomington-based writer, and occasional dancer and actor. She has a Ph.D. in folkloristics from Indiana University and an M.I.S. from The University of Michigan. Zilia has written for Wild Swan Theater, which produces plays for Michigan schools and libraries. She has two poems forthcoming in the journal Comparative Woman from Louisiana State University. She does freelance work as an English language editor and developmental editor. She works as an academic advisor for the Groups Scholars Program at Indiana University.

Wendy Teller, a retired systems and software engineer, writes fiction, memoir, and history. Her stories have appeared in Chicken Soup for the Soul, The Naperville Sun, and Rivulets. Her story Dusting the Towels received the Richard Eastman Prose Award. Wendy’s debut novel, Becoming Mia, takes place in the 1960s in Cambridge, Massachusetts, and Berkeley, California.

Her work in progress, The Sorrows of Sex, takes place in Hungary in 1905. She’s made important discoveries researching this novel, including several books by her grandfather – all in Hungarian – how to use Google translate, and a kissing cousin.

Wendy lives on a cliff in the woods near Bloomington, Indiana, with her husband.

Eric Rensberger is a local poet. He has lived in Indiana for almost all of his life, and in Bloomington since 1979. A slightly out of date version of his collected poems may be found at Poems of Eric Rensberger

He also occasionally writes prose, but this comes at unpredictable intervals, almost always because he needs material for a prose reading series. On the other, he enjoys talking to you, which you have to admit is a form of prose, and he does this every day of his life.

In his new memoir, A Surgeon's Odyssey, Dr. Richard Moss tells his story of traveling extensively through Asia while working as a cancer surgeon. His work was voluntary, however the "payoff" was in the rich, fascinating, and often bizarre experiences he had both as a surgeon and a wanderer. The book is centered around Dr. Moss' quest to serve others and learn valuable life lessons along the way.

A history of policing and anti-police abuse movements in Los Angeles from the 1965 Watts uprising to the 1992 Los Angeles rebellion.
https://www.maxfelkerkantor.com/ 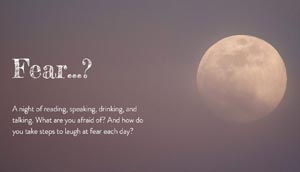 Welcome to the first of the Symposium series!
The theme for tonight’s readings is Fear. What are you afraid of, or, conversely, what AREN’T you afraid of? What are some tactics you have in place to combat what you can’t know, can’t prepare for?

Come listen to the community speak, both casually and competitively, and enjoy some drinks and food with a bunch of people who know how important words are.
***FIRST PLACE PRIZE FOR SLAM COMPETITORS IS $50***
If you want to compete, email v.corsaro95@gmail.com or DM Vinny Corsaro on Facebook. Cash and beer prize!

The tentative schedule of events is as follows…
5:30-6:30pm Open Write (with prompts).
-Some Butler MFA students will facilitate an open (and free!) workshop where we can collaborate as a community with academic and non-academic fiction/poetry/narrative writers. We will provide writing prompts and offer advice to people who may not have an accessible audience or mentors.

7-7:30pm Open Mic
-We'll invite members from the crowd in the beginning to put their name in a hat, and we'll have a community open mic. The readings should follow the overall symposium theme, facilitated by MC (me).

7:45-9ish Poetry/Story Slam begins
-Before the event, we will have contestants signed up for the Slam. We will have judges picked from the audience and we have a scoring scale. After the slam is over we will have a tally and have half the first round moving on to the finals.

9:00pm Featured Reader
-Tonight, we'll have the editors of Turnpike Magazine sharing some related pieces from their journal/themselves. Turnpike is a local publication (www.turnpikemagazine.com) two issues old, and they've bene killing it. Come hear a little about/from them!

9:30pm Final Round of slam
-We will have half the contestants from round 1 going up (with a second performance piece), and we will get a winner through that. There will be a prize for the winner, and that will conclude the evening. Probably around 10/10/30ish!

Considered by many to be a master of short, lyric free verse, Gregory Orr is the author of eleven collections of poetry. His most recent volumes include The River Inside the River (2013), How Beautiful The Beloved (2009), and Concerning the Book That Is the Body of the Beloved (2005).

Orr is also a writer of nonfiction and personal essays. This past year, he published A Primer for Poets and Readers of Poetry, in which, as a review in the Washington Post put it, Orr “serves as a sage and gentle guide, sharing wisdom about the creative process and how poetry can enrich those who embrace it.” Orr’s memoir The Blessing was chosen by Publishers Weekly as one of the fifty best non-fiction books of 2002. His personal essay “This I Believe” was broadcast on National Public Radio in 2006 and included in the anthology This I Believe (2007). His essay about working as a teenager for the Civil Rights movement in the Deep South was selected for The Best American Creative Nonfiction (2009).

Much of Orr’s early work is concerned with seminal events from his childhood, including a hunting accident when he was twelve in which he accidentally shot and killed his younger brother, followed shortly by his mother’s unexpected death, and his father’s later addiction to amphetamines. In the opening of his essay “The Making of Poems,” broadcast on National Public Radio’s All Things Considered, Orr said, “I believe in poetry as a way of surviving the emotional chaos, spiritual confusions, and traumatic events that come with being alive.”

Orr has received many awards and fellowships, including an Award in Literature from the American Academy of Arts and Letters, a Guggenheim Fellowship, two NEA Fellowships, and a Rockefeller Fellowship at the Institute for the Study of Culture and Violence. He was also a finalist for the Los Angeles Times Poetry Prize.

Orr teaches at the University of Virginia where he founded the MFA Program in Writing in 1975 and served from 1978 to 2003 as Poetry Editor of the Virginia Quarterly Review.