This is National Poetry Month and there are many poetry events happening on a daily basis.  Since we cannot possibly list all the events,  please click here for JL Kato's Poetry Notebook.  He has a wonderful comprehensive list for you to access.

Join us for our monthly featured poet/open mike series that happens every 4th Tuesday of the month.  In honor of National Poetry Month we are having a Poem By Heart Challenge: learn a poem by heart (by your favorite poet, one of your own creations, or both!)  We will take turns sharing these well-cared for, deeply learned poems and discussing the process of learning poetry by heart (which is different than just memorizing.)

We will be discussing A Man Without a Country by Kurt Vonnegut.  Chris LeFave of the Vonnegut Memorial Library will be leading our group discussion.

Nancy Chen Long, a 2017 National Endowment of the Arts Creative Writing fellow in poetry, is the author of Light into Bodies, winner of the 2016 Tampa Review Prize for Poetry (University of Tampa Press, 2017)  as well as Clouds as Inkblots for the War Prone (Red Bird Chapbooks, 2013). You’ll find her recent and forthcoming work in Prairie Schooner, Ninth Letter, Crab Orchard Review, Zone 3, Briar Cliff Review, Alaska Quarterly Review, Bat City Review, Not Like the Rest of Us: An Anthology of Contemporary Indiana Writers, and elsewhere. As a volunteer with the local Writers Guild, Nancy coordinates a reading series and works with others to offer free poetry workshops to the public. To give back to the writing community at-large, she reviews poetry books and interview poets at the blog Poetry Matters (readwritepoetry.blogspot.com), as  well as on her blog nancychenlong.blogspot.com. She has a bachelor’s degree in Electrical Engineering Technology and an MBA, worked as an electrical engineer, software consultant, and project manager, and more recently earned an MFA. She works at Indiana University in the Research Technologies division. www.nancychenlong.com
Praise for Light Into Bodies:
"Nancy Chen Long’s poems are lush, meditative, and quietly urgent. With lines that are lyrically charged and haunted by the past, these poems long to be heard and carried in the ear. Here are poems that are   not afraid of beauty, or silence, or to know, “Dust is never an option. I have no need to hide.” "~Ada Limón

Rachel Sahaidachny holds an M.F.A. in Creative Writing from Butler University. She was a finalist in the 2016 Radar Poetry Coniston Prize, awarded first prize in the Wabash Watershed Indiana Poetry Awards, and twice nominated for the AWP Intro Journals Award. She is co-editor of Not Like the Rest of Us: An Anthology of Contemporary Indiana Writers, and former poetry editor of Booth: A Journal. Recent writing has been published in Southeast Review, Radar Poetry, Written Here: The Community of Writers Poetry Review, Red Paint Hill, Nuvo, Indiana Humanities, and others. She works as programs manager for the Indiana Writers Center in Indianapolis.

J.T.Whitehead has traveled in Holland, France, Hong Kong, and China, and has studied in the U.K. Whitehead's work has appeared in Left Curve, the Lilliput Review, and Gargoyle. He is a Pushcart Prize-nominated short story author, a Pushcart Prize-nominated poet, and the winner of the 2015 Margaret Randall Poetry Prize. He is also the Editor in Chief of So It Goes: The Literary Journal of the Kurt  Vonnegut Memorial Library. His collection of poetry The Table of the Elements (Broadkill River Press 2015) was nominated for the National Book Award. He lives in Indianapolis with his wife and two sons, where he practices law by day, and writes poetry by night. 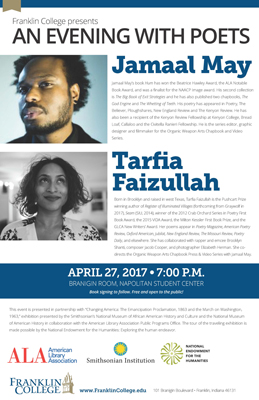 
Click here to see the flyer with all the details.

Don't miss your last chance to be on our stage and win a prize for your silly scribblings. We could still use a few poets, fiction writers, memoirists, spoken-word performers, or musicians to add their talents to the stage. Contact Terry at tkirts@iupui.edu or (317) 274-8929 if you'd like a spot on our featured performers list! Come one, come all!
https://www.facebook.com/IUPUI-Student-Readings-228507667180301/
Open to all IUPUI and area college students as well as community members, the IUPUI Student Readings provide a lively local stage for literary performance.

Born and raised in Indiana, Edward Kelsey Moore will be appearing in his home state on April 28th in Novel Conversations at Creston Middle School in Indianapolis. E.K.M. will be discussing his writing and will read from his New York Times bestselling novel, The Supremes At Earl’s All-You-Can-Eat, and from its forthcoming sequel, The Supremes Sing the Happy Heartache Blues. There will also be an opportunity for questions from the audience. During an appearance earlier in the day, he will talking about the connections between being an accomplished cellist and successful writer; perhaps he will also play for the public appearance! 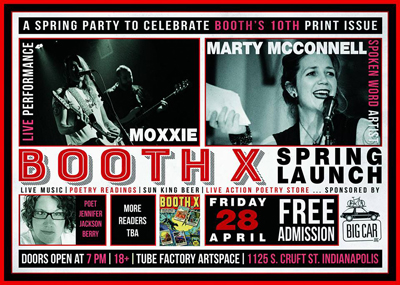 Go here for all the details about Booth X

Guest Readers: Richard Durisen and Samuel Franklin
Sunday, April 30 @ 3:00–4:30 pm
Bloomington and Monroe County Convention Center
302 S College Ave, Bloomington, IN 47403
Come early to sign up for Open Mic!
This event is free and open to the public/Free Parking in the back.

Richard H. Durisen is a retired Professor of Astronomy at Indiana University Bloomington. As a theoretical astrophysicist, he has worked on a variety of topics, including planet formation, meteoroid bombardment of Saturn’s rings, and the growth of black holes at the centers of galaxies. Since retirement in the summer of 2010, after family, friends, and travel, Richard has devoted most of his time to creative writing, including poetry and short stories, often with science fiction, fantasy, and horror themes. He has had three pieces of flash fiction published (at 713 Flash, Brilliant Flash Fiction, and Disturbed Digest), and one of his longer fantasy stories was included in the 2014 fiction issue of Bloomington’s magazine The Ryder.  His speculative poetry has appeared in Disturbed Digest, Illumen, FrostFire Worlds, and Space and Time. Richard is an active member of the local writers group Our Writing League and of the Emeriti House Poetry Appreciation Group. He has given public readings of his poetry and fiction in Bloomington and elsewhere.

Samuel T. Franklin is mostly from Indiana, by way of Clayton, Terre Haute, and Bloomington, where he has lived since January 2014. He currently puts his degrees in history and English to good use as a technical writer, and his first book of poetry, The God of Happiness, was published in November 2016 through Main Street Rag Publishing Company. Although he has no desire to live in one again, he will always have a soft spot for small, structurally questionable apartments. He can be found at samueltfranklin.wordpress.com.

Join us and hear this great featured reader! Derek Mong is the author of two poetry collections from Saturnalia Books, Other Romes (2011) and The Identity Thief (forthcoming, 2018), and a chapbook of Latin adaptions, In the Shadow of the Scrivener’s Quill (Two Sylvias Press, 2017). The Byron K. Trippet Assistant Professor of English at Wabash College, he holds degrees from Stanford, the University of Michigan, and Denison University. His poetry had appeared in the Kenyon Review, the Southern Review, Crazyhorse, Pleiades, Court Green and elsewhere. With his wife and co-translator, Anne O. Fisher, he has completed The Joyous Science: Selected Poems of Maxim Amelin. He blogs at Kenyon Review Online.

Imagine an America where the Civil War never happened and slavery still exists. Acclaimed author Ben H. Winters has done just that, and the result is his stunning and audacious thriller, UNDERGROUND AIRLINES—the lead summer title from Mulholland Books for 2016.

In UNDERGROUND AIRLINES, Ben Winters mashes and manipulates the thriller and speculative-history genres to explore deeper themes of slavery and racism’s bitter legacy. Victor’s world cannot quite be described as a dystopia, as there are far too many echoes of his damaged surroundings within our own. Ben’s attempt at holding up a mirror to our current world to see what looks back is a noble one, but reminds us still of Bertolt Brecht, who believed that “art is not a mirror held up to reality, but a hammer with which to shape it.” UNDERGROUND AIRLINES will be, for some readers, the hammer that helps shape a new reality of understanding, awareness, and dialogue. Click here for the flyer.
Go here for Tickets 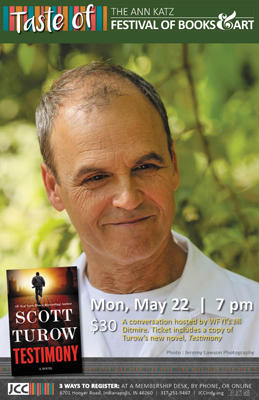 Go here to get your tickets:
https://www.eventbrite.com/e/a-conversation-with-author-scott-turow-tickets-32628902927